The Tiegan and Miles Show: Miles has Surgery, Tiegan Chews the Blinds, and Sleep is but a Distant Dream


We approached the holidays happily anticipating visits with friends and outings to museums and favorite restaurants. There was a change in plans. 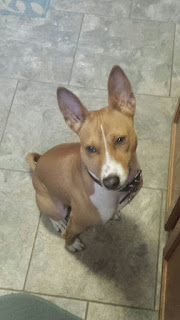 It started with a slight swelling on Miles’ right cheek. The vet prescribed antibiotics. The next day, no change, but at 3 am the following morning, Miles woke us and the entire right side of his face was hugely swollen. Thank heavens our local vet, a 24/7 hospital, is about 15 minutes away. They sent us to the specially veterinary service for a CT scan which revealed no foreign bodies, but a huge abscess. Surgery cleaned out the abscess and collected cultures and biopsies. No fractures, dental causes, bacteria or cancer—something I hadn’t even thought to be terrified about. There was a huge abscess with no distinct cause, perhaps a trauma; although that’s just a guess. After a couple of days in the hospital, he came home with an incision nearly from mouth to ear on the right side of his face. I’ve always found another option for my convalescing babies—a rigid turtleneck type collar, an inflatable donut—but  this was on his face, so it had to be a cone. I’m disappointed I couldn’t find a better alternative. 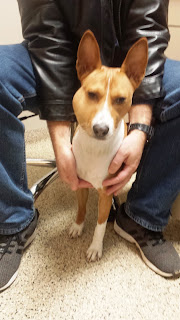 Miles at specialty vet about 4:30 am

Miles was a good brave boy through all of this, despite being captive in the inconvenient and tiresome cone. We shut the doggy door because the cone would not fit. He also couldn’t get into a cave bed with the cone. Not to worry, we had in reserve a cave bed cover that Miles had customized by destroying the tent piece, so we pulled out this untented fluffy bed and he decided he could sleep on that. 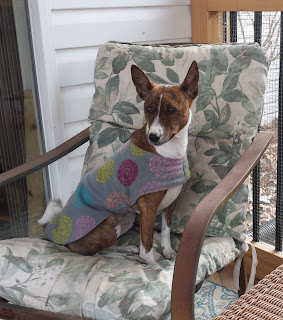 Despite my efforts to distract and cheer her, Tiegan worried while Miles was gone. We took him away and could not explain where he was. When we brought Miles home, he was wearing a cone so Tiegan growled at him whenever he came near her for the first few days. The right side of his face was still swollen due to the surgery. There was to be no rough play, running or jumping, and only quiet walks on a leash. We blocked off the stairs and took turns sleeping in the kitchen by Miles’ favorite bed. 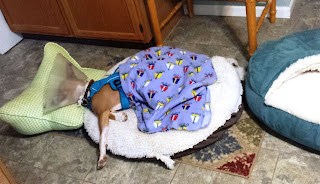 Tiegan and Miles are energetic Basenjis who see no reason to go around furniture when they can go over it. They run the Basenji 500 frequently, bouncing off the back of the couch, running on the end table, bounding over the love seat. Given the list of restrictions, we needed help of a pharmaceutical nature to keep Miles calm. I entertained Tiegan with long walks and visits to the library.

A sedative to keep Miles somewhat less active was added to the list of pain medication, antibiotics, and anti-inflammatory drugs. We kept our pill-splitter, collection of prescription bottles, and detailed schedule of doses at the ready. 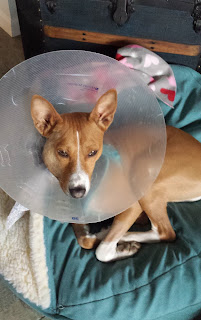 About 9 days after surgery

Miles, always a champion pill taker and lover of Pill Pockets, decided soon after he came home from the hospital that he was so over Pill Pockets. Eric pulled out the cheese and summer sausage (thank heavens for those holiday gift baskets) and we made a production of giving cheese treats with summer sausage chasers. Tiegan got summer sausage treats as well while we enthusiastically exclaimed “good doggies get treats.” We used small amounts of cheese and slivers of sausage. Fortunately this worked, because at one point we were dispensing 12 doses of medication each day. We gave extra sweet potato in their food and they suffered no digestive mishaps.

We received a list of ominous symptoms to watch for when Miles was discharged from the veterinary specialty hospital. They did not mention his incision would drain watery blood for several days, which prompted worried visits to our vet. During one of our vet visits to assuage my panic, Tiegan let us know it mattered not that it was a dark night with cloud cover and nothing to see outside; we really should have opened the blinds before we left. Eric replaced blinds on the window behind the couch for the fourth time since we adopted our princess.

We visited our regular vet hospital many times in those two weeks. When a new receptionist asked us if we’d been there before, I said with a sigh, “We practically live here.”

I do not function well on little or no sleep. Exhaustion and worry took a toll. On day ten, we delayed a dose of sedation which resulted in vigorous romping, and the stitches near Miles’ mouth began to bleed. I had visions of additional sleepless weeks plying our cone-encumbered boy with medications. We went to the vet, yet again, as I despaired about this potential setback. The vet was far less worried; this was not a major problem.

Eric, who is calm, rational, logical, sane –all the things I am not—decided he would sleep with Miles each night while I went upstairs to sleep with Tiegan, as my stints with Miles resulted in little sleep for me. Eric was far less likely to waken jarringly alert every time Miles shifted positions, and therefore managed to sleep fairly well with Miles and the cone. Regular sleep worked miracles, and I am once more functioning at a near normal level.

Miles learned to maneuver his cone and manipulate us. We found a smaller water dish that fit inside his cone so he could easily drink water. He decided it was more expedient to tip the dish and drink water off the floor. When Miles tapped his foot warningly on the rim of the water dish, we rushed over to hold it for him so he could drink in maximum comfort. A smaller food dish was also supplied, but we discovered the more acceptable level of service was for us to hold the dish just so while he ate.

The stitches were removed on day 15. While our regular vet removed sutures, Eric held Miles and I dispensed his favorite smelly Mackerel treats. Dr. D  knows her stuff and was able to remove stitches without incident. 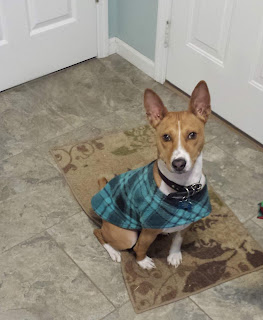 Miles does not bother his incision site, which is healing nicely. The swelling has drastically decreased and the right side of his face appears nearly normal. He gallops up and down the stairs and in and out the doggy door. My garden Crocs are once again filled with wanderlust and migrate from their post by the back door to visit other parts of the house. We are delighted to watch Miles join Tiegan steeplechasing over the furniture. It is joyful chaos, and our hearts smile.
Posted by Peggy Pick at 6:34 PM