We all know that basenjis are funny little dogs, who always keep us on our toes and do entertaining things.  But every once in a while, they do something truly unexpected that just leaves me scratching my head in disbelief.  Last Tuesday was one of those days. 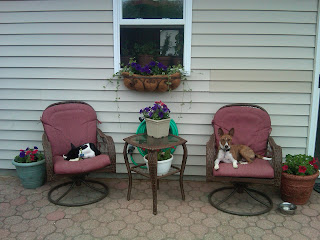 After a wonderful and too-short Memorial Day weekend, I went to work on Tuesday morning and left my 2 basenjis in their usual daytime spot:  Each dog sitting on a patio chair outside, bathing in the sunshine.   Now, before you think I'm nuts for allowing my two basenjis access to the backyard during the day, let me say that I've made my yard the doggie equivalent of Fort Knox, so that there is no possible way they can escape.  I have a 6-ft wooden stockade fence with no gaps (and not able to be climbed), with a very sturdy gate that remains padlocked 24/7 (and we live in a very safe suburban neighborhood), and to the bottom of the entire fenceline I have stapled chicken wire and dug it down 2 feet into the ground, so that there is no way a dog, rabbit, or groundhog could dig underneath the fence.  The dogs have access to the yard and most of the house during the day via a dog door in the kitchen wall, so that they can go outside as they please and sit in the sunshine all day long.  Not a bad life, right?

Anyhow, on Tuesday I went to work and left the dogs sunbathing as usual, but at the end of the day I got a very strange phone call from my husband.  He had just gotten home from work, and he was calling me to ask, "Honey, why is there a TURTLE in the living room???" 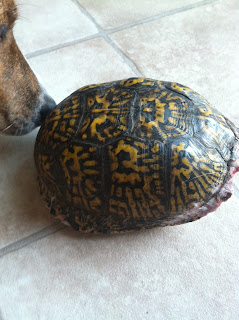 I happened to be in the checkout line at the grocery store at the time, and I was so floored by his question that I repeated it out loud, trying to make it register sense in my head.  The woman in front of me at the checkout stand overheard me, and naturally thought this was the funniest thing she'd ever heard.  And it is - if you're not the one trying to figure out how on earth a turtle would get into your living room!  Of course, I immediately knew it had to have been my mischievous basenjis, but that only raised more questions:  How on earth had they managed to fit their little mouths around that giant shell and carry it inside?  How had they managed to hold it in their mouths while they brought it in through the dog door?  Was it still alive?  And, the most vexing question of all:  How on earth did that poor turtle come to arrive inside my critter-proofed backyard?

Well, I knew the answers to the first two questions at least - my dogs have been known for bringing an astounding assortment of objects inside through the dog door, including a 6-ft tree limb that I found waiting for me in the kitchen one day when I arrived home from work.  (I still can't figure out how they managed to drag THAT sucker in through the tiny dog door!).  But a TURTLE?  Not to be doubted, however, as soon as I arrived home Biko happily demonstrated how easily the large shell fit inside his mouth.  I could see that they had done a number on the poor thing, as there were bite marks around the edges of its shell and little bits of shell on the living room rug.  But, as I rescued the tortoise from being used as a chew toy yet again, I did see the unfortunate creature move slightly inside his shell.  Phew!  He was alive. 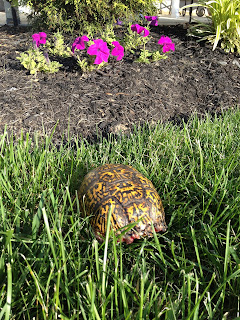 As I carried the coconut-sized shell through the woods surrounding my neighborhood, back to an area where I knew there was a little pond, I pondered some more on exactly how the little guy had come to arrive inside my yard.  The only possible way into the yard was via a 2" gap underneath one side of the gate where the ground was slightly uneven, under which we had placed heavy concrete paving stones so that the dogs wouldn't be able to dig under the gate if they tried.  I measured the turtle's shell with my hand, and after placing him carefully in some reeds by the pond, I used the same hand measurement to see if there was any possible way the little guy could have fit underneath the gate.  It was a very tight fit, but it looked like it could have been possible.  And given that there were no other signs of struggle anywhere around the fenceline, and the fact that it was a 90-degree day and the sprinklers had probably gone off in the backyard to water the grass, I figured that the turtle had probably come out of the woods, down the cul-de-sac of my neighborhood, and scooted under the gate in search of the cool water from the sprinklers.  Once in the backyard, however, I'm sure that my two basenjis pounced on him immediately, since they take great joy in hunting anything that moves (and sometimes things that don't).  Poor turtle!

The next day I went back to the pond, to make sure that the turtle had indeed lived through his ordeal as an afternoon chew toy for two basenjis.  He was gone from his hiding spot in the reeds, so I can only assume that he did eventually get up the courage to come out of his shell and dip into the water.  I was glad to see that he was gone, and hopefully from now on he'll have the sense to stay out of my basenjis' backyard hunting ground!
Posted by Kristen Ayres at 6:00 AM