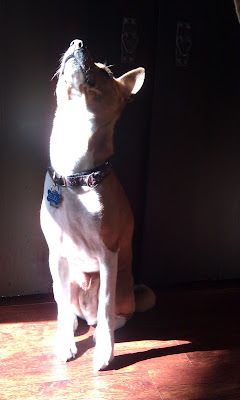 My cynical side could only respond to the verdict at the vet of "Both of your basenjis are the picture of health!" during our visit in May with a thought of "How long will it take for something to go wrong?"

Four days to be exact.  As I was petting Shaka after his dinner, I was shocked to discover a lump on his back that wasn't there the day before, not even there in the morning.  And it was the size of an unshelled pecan.  My logical self told me a tumor that large could not develop in less than eight hours. I remembered that he'd had a bad flip when trying to chase a pigeon on our walk that day before, but it seemed hard to believe it was an abscess or bruise, and he showed no pain when I touched it.  Common sense should have answered immediately, and when we arrived at the vet she was fairly certain of what was up before she even checked him:  reaction to immunizations.

There was good support through BRAT-CHAT, and most of it confirmed what the vet suggested:  warm compresses two to three times a day and basically just wait.  Beyond that, she suggested that for future rounds of shots, we do them sequentially and in different spots. A couple of people suggested Benadryl before the visit.

As usual, my vet outlined the worst case possibilities just in case.  If it didn't go down over the course of time, it could develop into a tumor and that she would recommend removing it if it didn't go down.  For the first few days I was convinced that we might have to face that reality.  It was still as big as a pecan for several days.  And then it went down to the size of a single almond.  And then a lentil.  And after a week and a half was completely gone.

Thanks to all of those within BRAT that helped with support and ideas. Now Shaka is back to his regular sun spot routines and chasing pigeons. 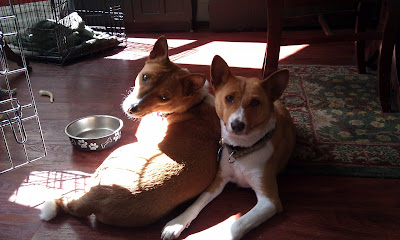