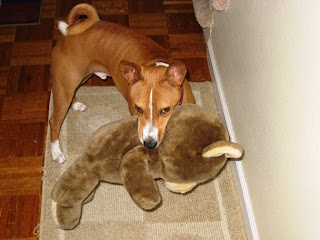 Ivan and Dasa are respectively our second and fourth basenjis. Dasa is sweet, quiet, and not nearly as high maintenance as Ivan. When I told a friend Ivan has food issues, he replied, “we all have food issues.” True enough, I suppose, but we don’t bite someone when they try to take the last brownie. OK, perhaps not the best example.

Counting a very nice foster home, we were Ivan’s fourth home when he arrived at our house shortly after his second birthday. Along the way, Ivan developed various issues that make life challenging. His food aggression has been character building.

The feeding routine and meal preparation for Ivan and Dasa involve logistical planning and choreography that make the average Broadway show look simple. Timing is everything. More precisely, actually delivering food to hungry basenjis is everything, but the sequence of events is crucial to success during the circus that is mealtime for the munchkins.

While we are busily preparing dinner to their exacting standards, Ivan races in a circle through the kitchen, living room, and piano room, occasionally barooing to encourage us to hasten preparations before he faints away, weak with hunger. He carries a stuffed teddy bear on these trips, which he drops at my feet and baroos to indicate I should simultaneously hurry up with the food and hustle to the doorway to throw the teddy down the hall. He races after the teddy and runs another lap while I scramble around in the kitchen before I am required to stop and throw the teddy again.

Ivan and Dasa have different dietary requirements, so we need to keep track of who gets what food and supplements while performing this dance. Dasa sometimes scratches at the door or even my shoes to let us know she is also anxious about receiving nourishment. She tends to stick close by while food is being prepared, occasionally doing a great meerkat imitation, standing on her back legs and peering up at the counter top as if hopeful I’ll just give her all the food while Ivan is racing about.

There must always be a door between Ivan and Dasa when we feed them. When the weather is nice, he eats on the patio. When the weather is less than ideal, he eats in the bathroom off the kitchen. Only after the door has closed behind Ivan do we give Dasa her food. There are no chewies lying around our house because even if we had dozens of chewies scattered so thickly we were constantly in danger of tripping over them, Ivan would go bananas if Dasa tried to chew one of them.

Ivan has issues with a lot of things, but we’ve learned to live with this. After all, there are rumors that I too am high maintenance; difficult to believe, I know.
Posted by Peggy Pick at 10:29 PM