How Much (Trouble & Fun) Is That Basenji in the Window? 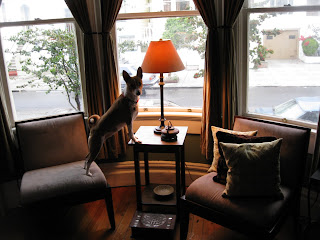 Eleven months ago, I drove down to the cargo pick up at and waited for the last crate to come off a plane from . Other people let out excited puppies, jumping and other family pets. Concerned that maybe there had been a missed connection; I was thrilled when I looked in the last crate to see a whimpering, shivering little basenji in a fleece coat. What a happy day! Bow had finally arrived safely. 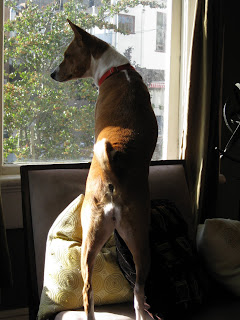 After a first challenging experience with a foster, I was excited but concerned how Bow would react to her new digs. The first hour was not tense, but she kept her distance and sniffed and explored the house. I respected her space, but not even 90 minutes into her stay, she jumped up on the couch, snuggled next to me and rested her head on my thigh admiring the three screen entertainment center that dominates the living room. I’m not talking about some fancy, high-def flat screen but the 100-plus year old bay windows that look out on the street. There are identical ones at the back end of the house that look out onto the garden. Bow will check out the occasional cat or bird passing through back there, but it’s no match to what she can see from the front.

The bay window is her ESPN/HBO/CNN/Netflix all in one. Sports, news, comedy, tragedy and wildlife all happen for her to view. It’s also proved to be my gauge on progress with her behavior.

Bow has not been exactly reticent, and the sound of a skate board, bark, loud talking or ice cream vendor bell will grab her attention. There may be a quick scratch and flashing of the basenji Mohawk, and then it’s over.

There is a pug whose owner ties it up while its guardian visits our neighbor. The pug barks and barks and barks for nigh on 30 minutes. Bow will certain jump up to check it out, but slowly she’s come to just watch it with increasing calm and disinterest. As I see her street reactions diminish with each week, I can see that months of working with a trainer have slowly paid off. 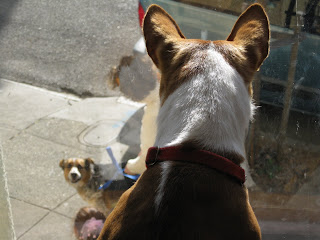 What I didn’t realize at first is that while that bay window is a place for her to be entertained, it is also a place for her to entertain others – a veritable three-panel basenji theater in the round where she has built a growing following. Increasingly on our walks, we run into more people who will stop and say “Oh, I know her! She puts on a little dance routine every time I walk by.” Or, “I’ve been curious what she looks like from the waist down. I had no idea she would have curly tail.” 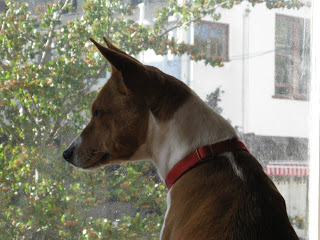